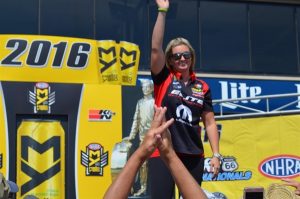 Melling Performance has made a deal to partner with Two-time Pro Stock champion Erica Enders for the 12 remaining races on the NHRA Mello Yello Drag Racing Series schedule as a major associate sponsor.

Enders will drive the Elite Motorsports/Melling Dodge Dart during the K&N Filters Route 66 NHRA Nationals this weekend at Route 66 Raceway to kick off the partnership.

“We’re excited to partner with Melling Performance,” Enders said. “They’re a very reputable name in all of motorsports, and we’re pleased to be able to introduce them to a whole new market.”

Enders is returning to the site of her first career victory, scored in 2012. Since then, she has become a superstar in the sport, winning six races and the Pro Stock championship in 2014 and nine races and the title last year. She recently was nominated for an ESPY Award in the Best Driver category for the second year in a row.

“Everyone at Melling Performance is excited about our new association with Erica and Elite Motorsports,” Melling Performance CEO Mark Melling said. “The power and speed of NHRA is a perfect fit for our company. Melling has been launching a ton of new performance engine parts, and we are pumped to see Erica launch our logos down the strip.”

« Previous
Next »
Get Your Melling Performance Mini Catalogs